This project started back in early 2008 when I was looking for my first "real car". I'd been saving up money while driving a junker so that I could buy a car outright and not waste a bunch of money on a car loan. I wasn't even really sure what make/model I wanted, and as my eyes drifted down the list on AutoTrader they suddenly landed on the word "DeLorean".

I spent the next 6 months learning everything I could about what to look for in a DeLorean purchase, and dreaming up all the cool things I was going to do to it. I was especially inspired by Ryan Brandys' Mac Mini Projector DeLorean. 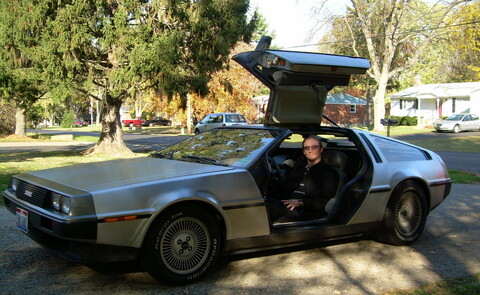 Finally late that fall I found a good deal on one and brought it home. I didn't actually start work on my project right away though, because I wanted to just enjoy the car for a year or so before I started dismantling things.

The way I see it, if you're going to build a computer into a car, why not do it with some style?

My main goal was to make it talk (Knight Rider style; like a personal assistant, not a pre-recorded gimmick) though somehow the digital instrument cluster portion of the project took over to become the main focus. The idea was pretty simple: I have a computer in the car, so why not render the instrument cluster on a computer screen? I also planned on having some fancy lighting and buttons on the steering wheel, a sound system driven by the computer, a "swooshy light" on the grill, and some strategic cameras to help look around corners and give me a wider field of view. (I also have a number of other crazier ideas which I'm not going to list here until I determine that they're actually practical.)

Now, after an awful lot more work and learning than I anticipated, I have each of the features pretty close to completion. I'll do a write-up on each one separately, and list them on the site as I go.